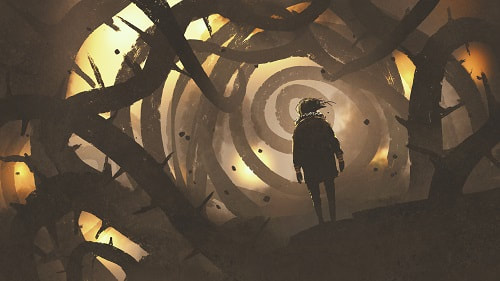 ​Now that we have an idea of what cosmic horror is let's delve a bit further. In this lesson, we'll examine a few different examples of cosmic horror in both written and visual form; break down and explore some of the components; and finally, try our hand at writing cosmic horror. First, let's take a look at a snippet of Lucy A. Snyder's story*, "While the Black Stars Burn," taken from her collection by the same name.

*Posted with the author's permission.
Feeling supremely self-conscious about her dowdy thrift store clothes and the unfashionable knit cap over her unwashed hair, Caroline took a deep breath, got a better grip on her violin case, lifted her chin, and strode out onto the small, brightly-lit recital stage. Her footsteps echoed hollowly off the curved walls. The theatre was small, just thirty seats, and she could sense rather than clearly see someone sitting in the back row on the left side. Normally having just one listener would bolster her confidence, but today, the emptiness of the room seemed eerie. She bowed crisply toward the dark figure, and then took her seat in a spotlighted wooden folding chair. The music stand held a hand-written musical booklet made from old-fashioned parchment. Her eyes scanned the cover sheet:
Into the Hands of the Living God
An Etude in G Minor for Violin
Composed by Dunric Cage-Satin with Dr. Alexander Harroe
Caroline frowned at the title. Was this some sort of religious music? As far as she knew, her father had been an ardent atheist his entire life. Ah well. There was nothing to do but struggle through as best she could. At worst she’d perform miserably, lose her mysterious patron, and be exactly as penniless as she’d perform miserably, lose her mysterious patron, and be exactly as penniless as she’d been when she woke up that morning. She opened her violin case, pulled her instrument and bow from the padded blue velvet cutouts, carefully ran her rosin puck across the horsehair, flipped the cover page over to expose the unfamiliar music, and prepared to play.

The notes bore a cold, complex intelligence, and the tonality reminded her a little of Benjamin Britten. But there was something else here, something she’d neither heard nor played before, but nothing bound in stanzas was beyond the capacity of her instrument or her skills. She gave herself over to craft and educated reflex and the stark black notes transubstantiated into soaring music as nerves drove muscle, keratin mastered steel, and reverberation shook maple and spruce.

The stage fell away, and she found herself standing upon a high, barren cliff above a huge lake with driving waves. The air had an unhealthy taint to it, and in the sky there hung a trio of strange, misshapen moons, and opposite the setting twin suns three black stars rose, their bright coronas gleaming through the streaked clouds.

When the dark starlight touched her palm, her scar exploded, a nova made flesh. She fell to her knees on the lichen-covered rocks, unable to even take a breath to scream as the old lines glowed with a transcendent darkness, hot as any stellar cataclysm.
She heard footsteps and the rustling of robes, and through her tears she saw a regal iron boot beneath an ochre hem embroidered with the tiny white bones of birds and mice.

“You’ll do,” the figure said in a voice that made her want to drive spikes into her own brain. “Yes, you’ll do.”

She felt the terrible lord touch her head, and it was like being impaled on a sword, and suddenly she was falling--

—Caroline gasped and the bow slipped and screeched across her strings. Blinking in fear and confusion, it took her a half second to realize she was still onstage, still performing...or she had been until her mistake.

“I’m—I’m so, so sorry, I don’t know what happened,” she stammered, looking to her lone audience member in the back of the theatre. But all the seats were empty.

“It’s quite all right.” Professor Harroe hurried onstage from the wings, beaming. “You did wonderfully, just wonderfully.”
“I...I did?” She blinked at him in disbelief. “But...I messed up, didn’t I?”

“Oh, a mere sight-reading error...I’m sure you’ll play straight through to the end next time! And. Your new benefactor has requested that you perform tomorrow evening at the St. Barnabus Church on 5th Street. 6pm sharp; don’t be late!”
​
“Oh. Yes. Okay.” She set her violin down on her lap, and the pain in her hand made her look at her palm. Her scar had split open during the performance, and her sleeve was wet with her own blood.

Next, let's take a look at a story from Betty Rocksteady* titled "Elephants that Aren't" found in her collection, In Dreams We Rot. There is some language, so skip it if you feel so inclined.

*Posted with the author's permission.
Chad waved Lindsay in. “Lindsay has something important to show us.” The door clicked shut behind her. This was it.

Everything was ready for her. There was a reel-to-reel projector tucked behind his desk—she had never seen it here before—and he wheeled it out to the front, pulled down the blinds. “It’s ready, isn’t it?” His eyes were wet, bloodshot. Lindsay’s mouth wouldn’t work to reply. It didn’t matter. Chad continued the business of setting up the room, pulled down the dusty screen that she would play her film on. Then he looked at her. Lindsay stepped forward. The class shuffled uncomfortably. She ignored their whispering.

She had never used a projector before, but it was comfortable in her handsnothands. They seemed to know what to do all on their own. Chad’s chair screeched as he pulled it forward. She could smell him. A damp, animal smell.

She loaded the film.

This was it. The moment was pregnant. She had done it. She had made something. Her pride shook, though, left a weird taste in her stomach. How had she even gotten here? The room was soft around her, flimsy.

She played the film.

She had gotten it right.

A creature was moving across the screen, dragging its legs. Its trunk trailed behind it, crumpled and sore. Its eyes were scratched out. The music was slow then fast then slow. The beach was in the distance.

Foggy. The murmuring in the classroom was far away. Where was the music coming from? Lindsay was very tired. Each slow blink was a rest, a silence, a relief.

the elephantnotelephant was joined by something tall, very tall, it stretched up into the grey sky, a tower with legs that have too many joints, or maybe no joints at all everything is moving very very slowly then very very fast

The sky crackled with electricity, black dots that blot out the sun then fade, leaving impressions in the sky. An eclipse. The sun the moon the sun. The elephants join trunks, their trunks stretch out long and writhe into each other and they are chewing and everything is moving all at once
In front of her, beside her, her classmates slid out of their chairs, twitching to the floor, the smell of salt water and sand. Their frothing mouths.
The elephants the elephants the elephants

Everything was so fucking beautiful.

The chaos around her was easy to ignore. She could relax into the film.

Enjoy the aftermath of creation. Chad was beside her, and everything that was moving was slow and liquid. The sounds of vomiting, the sounds of screaming, it all faded away. She was weightless. She was boneless. Even if she wanted to move, she couldn’t.

Something was leaking out of her mouth but she was not afraid, she could never be afraid.

No, she was satisfied.
​
The ocean swallowed up the tower and the elephants and her mouth opened and it was all coming out, it tasted like ink and sand and salt and everyone was screaming, they opened the window and the outside was sepia-toned and the elephants--
What elements of cosmic horror did you see in these two excerpts? What worked? Now, I'd like you to write your own piece of cosmic horror. Remember to incorporate elements of the following:
​
o The unknown or alien
o Forbidden knowledge
o Small pieces that seem insignificant on their own, but when put together form a horrifying picture
o Beings or entities that care nothing about humanity
o Insanity/madness

When you are finished, email your sample to C.R. Langille (crlangille@crlangille.com and put Cosmic Horror Workshop Sample in the subject line) for feedback on how well it nailed cosmic horror. (Please keep samples 2500 words or less).